How Civil Unrest Causes a Surge in Unlicensed Security Companies 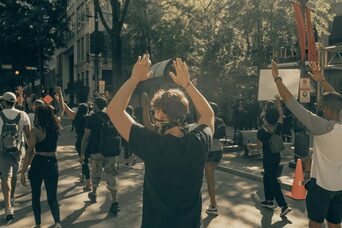 Civil unrest will cause more unlicensed security companies. WPG is 100% in compliance of all laws.

As chaos ensued in Minneapolis after the killing of George Floyd, a lot of calls to 911 went unanswered and the police couldn’t be found to respond to emergency situations — with this period of civil unrest came an opportunity for private security agents to take jobs and make money.

There was nothing wrong with that, except that a lot of these agents weren’t exactly fit for the job. Therefore, the Minnesota Private Detective and Protective Agent Services Board, which gives licenses to individuals and companies in the business of providing security, became concerned about subcontractors who do not have the state license to work in security.

As the protests happened in the city, there were many private security agents who took jobs even though they are unlicensed.

Rick Hodson, the board’s president, said that if they are not given permission by the board, they are committing a crime.

According to the board, there are around 14 unlicensed companies who are doing private security jobs during the events that transpired after the killing of George Floyd. Some of the security companies came from outside Minnesota and they were able to take jobs by advertising on Facebook and Craigslist.

What was even worse is that some of the unlicensed agents even posted on social media about their jobs. One example is David Sodergren, who was hired to guard Thurston Jewelers. He posted pictures of himself while on duty the night after the store got looted.

Sodergren was discovered to have a felony weapons conviction from 1991. He admitted on social media that he fired a warning shot to ward off the looters.

When contacted by the media, Sodergren defended himself by saying he was not paid for his services and therefore does not need a license. He was also asked whether he could legally own a weapon, a question to which he evaded.

The risks of hiring unlicensed security agents are highly applicable also in situations unrelated to civil unrest. In 2016, the Nashville police discovered that at least five security guards on duty at the Tennessee Titan football games have expired licenses or have no licenses at all.

Security guards who have no license and proper training put everyone else in danger. When the security personnel is not screened, there’s no telling the comings and goings happening within the event, which can result in a lot of civil liability.

Stringent background checks should have been done, according to the Tennessee Department of Commerce and Insurance, which issued a $500 penalty to the security group handling the event.

How Security Should Be Planned During Periods of Civil Unrest

Riots and disturbances can happen without advance warning, which poses a higher danger to individuals and businesses. If you are tasked to make the preparations, plans should be put in place for possible scenarios and these plans can only be carried out with a licensed security team who are trained to handle even the most stressful situations.

Your security team can help account for all the employees in your organization and layout individual responsibilities, and how each person or each level in the organization will communicate with each other during emergency situations.

Your people should be on alert for potential threats, which entails being aware of what is happening in the neighborhood. These threats include suspicious people, abandoned packages, destruction of property, and increased vandalism. These events are indicators of the mood of the people around your neighborhood.

There are two factors that come into play when it comes to how your security team will respond to a particular disturbance: A) the nature of the event, and B) your location. A response may not be needed for a gathering of peaceful protesters, but it’s a different story when it comes to riots, looting, and destruction of property.

The same goes for the location of your business. If the unrest is happening near your building, the security team will initiate a more aggressive response. The authorities should be contacted

in case of violent events that will occur near your location and employees should be kept inside. A lock-down may be necessary in times of extreme riots.

Preparing ahead of time for demonstrations, rallies, or large gatherings means better protection for your employees and property. Here are some measures to guide you:

Think of Security as Preparedness

Hiring licensed and highly-trained security agents is always a great investment when it comes to ensuring the safety of individuals and properties. World Protection Group provides only the best people for your security needs and we are 100% in compliance with all laws.

We employ agents with backgrounds in military protection and the Secret Service. Get in touch with us and let us help plan your safety.