Quoted in Forbes: Mark Zuckerberg’s Security Costs Have Surged, Unlike Bezos, Ellison And Others

As the net worth of the five richest American company founders has more than doubled over five years, the personal security costs to their companies have not grown at the same rate—with the exception of Mark Zuckerberg.

The billionaire Facebook founder draws a salary of $1 and receives no bonus. But in the aftermath of last spring’s shooting rampage at YouTube’s headquarters, which left three people injured and rattled Silicon Valley, Facebook’s board of directors granted Zuckerberg a $10 million yearly allowance to pay for the personnel, equipment and services needed to keep him and his family safe. That was on top of the security that Facebook already provides Zuckerberg, who boasts a net worth of $62.3 billion. The company also pays for his personal aircraft (to the tune of $1.5 million) “in connection with his overall security program.”

Spending on Zuckerberg’s personal security increased more than 500% from 2012 to 2017—a sum that doesn’t take into account the $10 million allocated to Zuckerberg in July or the measures the company has taken to harden its defenses at its Menlo Park, California, campus. That compares with a 220% increase in his net worth over that same period, to $56 billion in 2017. Some of the security measures adopted appear ripped from the pages of a Tom Clancy thriller, including a rumored “panic chute” for making quick escapes. 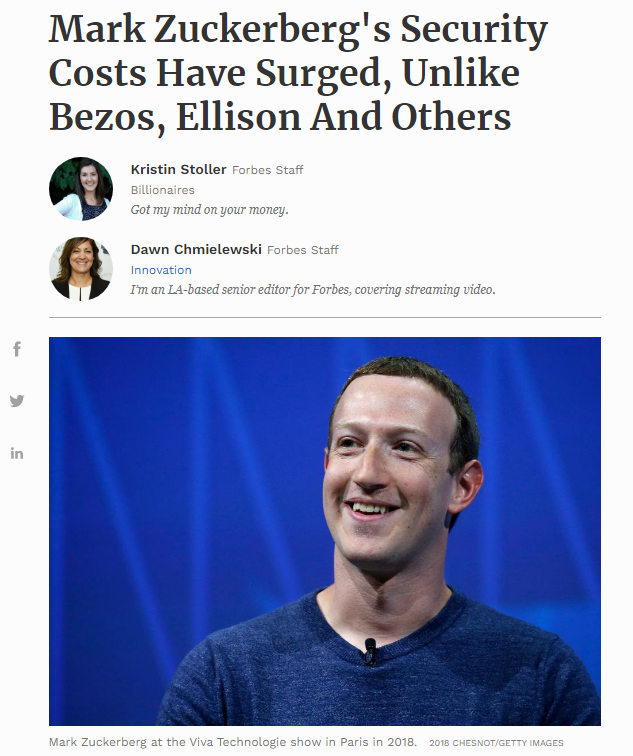 American billionaires, and their lavish lifestyles, have come in for heightened criticism as income inequality in the U.S. reaches levels not seen since the years before the Great Depression. That raises questions about seemingly exorbitant corporate perquisites reserved for the wealthiest executives—like companies picking up the tab for personal security.

Forbes looked at the five richest founders of public companies in the U.S. and found no correlation between growth in wealth and increased benefit for personal security paid by the firms they founded. Rather, companies like Facebook are making assessments about risk based on an executive’s visibility and a company’s connection to controversy. Zuckerberg has emerged as the public face of a social network that is associated with some of society’s most divisive issues and has unprecedented influence over billions of people’s lives.

Amazon did increase spending on security for the world’s richest man, Jeff Bezos, as its founder’s visibility grew in Hollywood and in Washington, D.C., where the executive’s ownership of the Washington Post made him an occasional target of President Trump. But unlike with Zuckerberg, the security increase was barely a shadow of his rise in net worth. Bezos’s wealth soared to $131 billion this year, a staggering leap from $18.4 billion on Forbes’ 2012 list of the World’s Billionaires. Amazon spends $1.6 million a year on Bezos’ security, a figure that hasn’t changed since since 2012. In addition, the company picks up the tab for providing security at business facilities, according to regulatory filings. A company spokesperson said Bezos pays for personal security separately.

Berkshire Hathaway didn’t report security costs associated with protecting its avuncular CEO, Warren Buffett, until 2008, a year after a man with camouflage paint on his face and a fake gun tried to break into the billionaire’s home. In 2017, Berkshire spent $375,000 on personal and home security services for the Oracle of Omaha, a 16% increase from security spending five years prior. Over that same time Buffett’s net worth rose 72% to $75.6 billion. Today, his net worth stands at $82.5 billion.

Time and time again, Insite Risk Management president Christopher Falkenberg says, he’s been-hard pressed to find a correlation between a client’s net worth, his or her perceived risk and the amount of security he or she is willing to accept. In many cases, the level of security depends on what information is available about the executive in the public domain.

For Larry Ellison, the founder of software firm Oracle, security spending actually declined over the last decade, even as his net worth rose 74% over the past seven years, to a current $62.5 billion. The company pays the annual costs of maintaining security personnel at his “primary residence”—likely Ellison’s Japanese-style Woodside, California, estate with its koi pond and tea house, though the company wouldn’t say—an amount that totaled $1.5 million in 2017 vs. $1.7 million in 2007. Ellison paid for the initial purchase and installation of the security equipment and is responsible for ongoing maintenance and upgrades, according to SEC filings. Ellison served as Oracle’s CEO until 2014, and is currently chief technology officer and chairman of Oracle’s board.

Google parent Alphabet has not disclosed any spending in recent years to cover the personal security of its billionaire cofounder Larry Page, who is the parent company’s CEO. Nor has it disclosed any spending to protect Google cofounder and Alphabet president Sergey Brin. The last time Google devoted money to Page’s security was in 2006, when the company allocated $33,195 for transportation, logistics and personal security during personal travel for Page. Both Page and Brin, worth $50.8 billion and $49.8 billion on Forbes’ recently released Billionaires list, have elected to receive $1 annual salaries. The search giant did not respond to Forbes’ request for comment.

Security analysts interviewed by Forbes say the amount a company spends to safeguard its top executives often depends on whether an executive or company is mired in controversy—or how recognizable an executive is.

“If you are talking more about a high-profile CEO that is discreet and is not very outspoken, then this individual may opt out of having security,” said Andres Paz Larach, a senior vice president at longtime private security agency Pinkerton.

Those who specialize in protecting celebrities and high net worth individuals say Zuckerberg’s visibility—and his association with Facebook’s numerous privacy breaches and Russian manipulation of the social network during the 2016 presidential election—heighten the risks. Business Insider recently reported that Facebook has dramatically expanded its security apparatus, as the social network girds against a range of perceived threats from car bombs to state-sponsored espionage to stolen prototypes. It reported that a 6,000-strong security army quietly protect its tens of thousands of employees and armed executive protection officers stand guard outside Zuckerberg’s homes.

“All it takes is one crazy guy in some state in the United States that’s fixated on that and he becomes fixated to the point where he’s blaming Zuckerberg,” said Kent Moyer, chief executive of World Protection Group, a security firm in Beverly Hills that counts celebrities and other high-net-worth individuals among its clients. “Add to that mental illness a fixation on guns and weapons, and before you know it this guy is up at the doorstep of Mark Zuckerberg.”